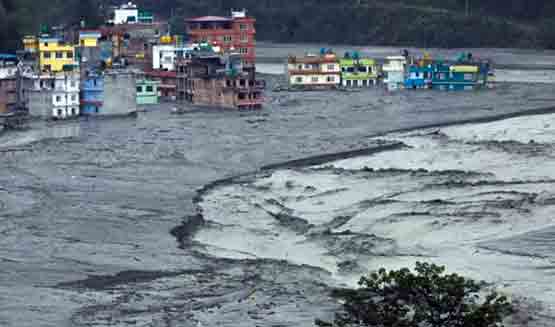 In Nepal on Thursday, an Indian and two Chinese citizens were died after being washed away by floods in Sindhupalchok District.

They used to work on the Melamchi Water Supply Project, as per Arun Pokhrel, Chief District Officer of Sindhupalchok District.

“Two Indians and one Chinese citizen remain unaccounted for. Kamallochan Mahato, the Indian who was killed, has been recognized. Arun Pokhrel informed that none of the missing Nepalis had been recovered.

Due to an increase in Melamchi water level as a result of continuous torrential rains, Sindhupalchok has been the worst district.

To carry out the relief efforts, the Nepal Army, Police, and Armed Police Force have been mobilized.

Around 200 homes were flooded, and numerous bridges were seriously damaged.

As per the Home Ministry, 46 individuals in Sindhupalchok and 50 in Dang have been evacuated.

Residents who live along the Narayani River were cautioned to stay vigilant because the river was rushing above the warning line.

A ‘Monsoon Preparation Response Plan’ has been developed by the Home Ministry. The strategy, according to the Executive Committee, was put in place to reduce losses caused by monsoon-related calamities and to make the relief, rehab, and relief operations more successful through concerted action.

As per the Ministry of Hydrology and Meteorology’s Meteorological Forecasting Division, most sections of the country will get medium rainfall on Friday, while the far western provinces and Lumbini Province may see significant rain, including mudslides.