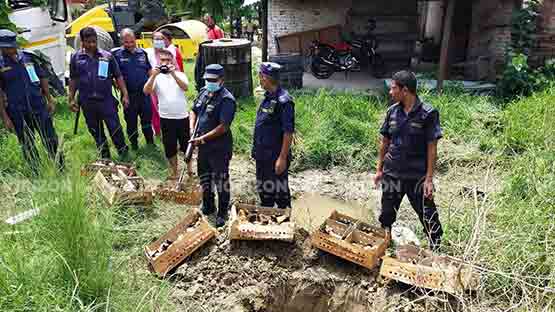 24,000 illegal chickens destroyed which are imported from India evading the custom, News of Nepal

Kapilvastu: Illegal chickens have been destroyed by the ward police office Chandrauta. According to the police, the suspects were taken under control while fleeing leaving a bicycle heading towards Bargadawa at Samiti Chowk in Shivaraj Municipality-4 of the district.

According to Tara Prasad Khanal, Deputy Inspector at the Ward Police Office, Chandrauta, the chickens contained 600 pieces in eight cartoons. According to the police, the chickens of the Giriraj breed are estimated to have been illegally imported from India by evading customs.

According to the police, they managed to take him under control on the basis of special intelligence. According to the Ward Police Office, Chandrauta, the illegal chickens were taken under control and destroyed along with local people’s representatives and media persons. Deputy Inspector Khanal informed that further investigation is underway.

The government has banned the import of birds products from the Indian border as bird flu has entered the country. However, the smuggling of chickens and hens has not been stopped in the border area yet.