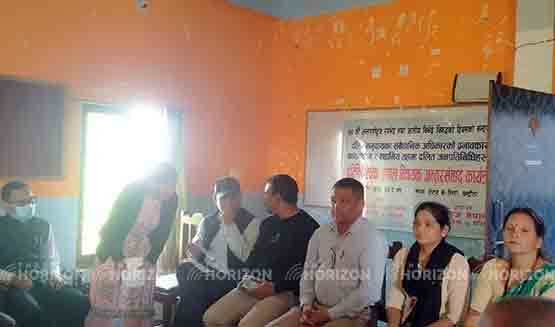 Nepal: Lumbini Province Assemblymember Arjun Kumar KC said that everything should be done to end caste discrimination. He said this while addressing a program organized in Chandrauta of the district on Tuesday.

Meanwhile, the former chairperson of Sahaj Nepal Sibi Gahatraj said that there should be an initiative from the leadership level to reduce caste discrimination along with social evils. He said that the concerned bodies and social activists should take concrete steps and conduct empowerment and public awareness programs against discrimination. Stating that caste discrimination will not change by ordinary people, former president Gahat Raj also clarified the current issues of Nepal, citing examples of discrimination in the international community.

Similarly, Ward Chairperson of Shivraj Municipality, Ward No. 10, Manju Mishra, representing all the wards, said that it would be the same if people were born with the same culture. She said that it was important to eliminate discrimination as the lower caste, upper caste, and religion were created by human beings.

Advocate Imaan Sunar briefed about the implementation of the constitutional rights of the Dalit community and the question of Dalit people’s representatives at the local level in the context of the 57th International Day Against Apartheid and Racial Discrimination organized by Sahaj Nepal and supported by Shivraj Municipality. He also said that the 2072 BS constitution from the government side has made proportional provision for all castes and communities.

Speaking on the occasion, Sanjiv Gaharaj, President of Sahaj Nepal, said that it would be difficult to include the people in the society unless the educational level is raised. The program was attended by Shivraj Nagar Chief Netra Raj Adhikari, Deputy Chief Shiv Kumari Tharu, Administrative Officer Ganesh Prasad Aryal, representatives of various organizations, and people’s representatives of various local political parties.