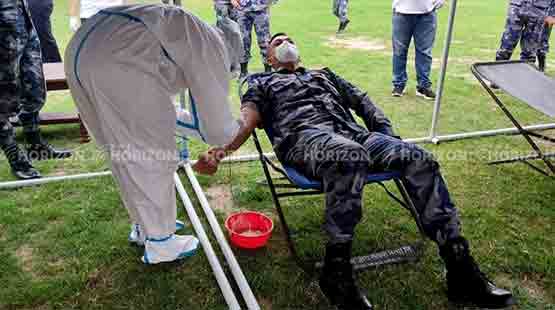 Despite the nation’s security, Nepal Arm Police Force has done another exemplary job

Kapilvastu, Nepal: Kapilvastu Armed Police Force Nepal No. 5 Bindhyawasini Bahini Headquarters has completed a blood donation program. With the original slogan that there is no shortage of blood in Butwal, Nepal Volunteer Blood Donor Society Rotary Rotaract and No. 5.

The blood donation program has been organized by Vindhyawasini Bahini.

He informed that the Armed Police had donated blood saying that no one should have to lose their lives in this corona epidemic due to lack of blood.

Speaking on the occasion, Krishna Chauhan, president of Nepal Volunteer Blood Donor Society, Rupendehi, said that the blood donation program was being held in Butwal with the aim of providing blood to Butwal 24/7 hours a day even if no blood was found elsewhere.

Suraj Kharel, the coordinator of the Rotary Rotaract Covid-19 Facilitation, said that the blood donation program was organized to provide blood to other types of patients along with Covid-19 to prevent blood shortage.

Stating that 51 units of blood were collected in the corps, Chauhan and Kharel also gave a token of love to the Armed Police Force.