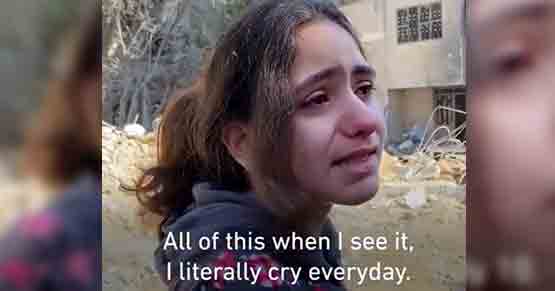 Do We Deserve This? I’m Only 10, Heartbreaking Video of Palestinian child

Palestine: Imagine growing up in a world where all you saw was bloodshed. That is a Palestinian child’s life.

Since the bloodshed began on Monday, Israel has killed at least 149 people, including 41 children. Over 1,000 individuals have been injured, many of whom are children.

In the midst of it all, a video of a 10-year-old Gaza Strip girl has gone popular on social media. Nadine Abdel-Taif is seen in the video with teary eyes, talking about how hopeless she felt during this difficult moment.

Israeli Prime Minister Benjamin Netanyahu, on the other hand, has declared that Israel will continue to target Hamas for as long as it is required.

The attacks were in response to Hamas firing rockets into Israel after Israeli police raided Palestinian worshipers at the Al-Aqsa mosque and clamped down on protests against Israeli deportations of Palestinians from their homes in occupied east Jerusalem.