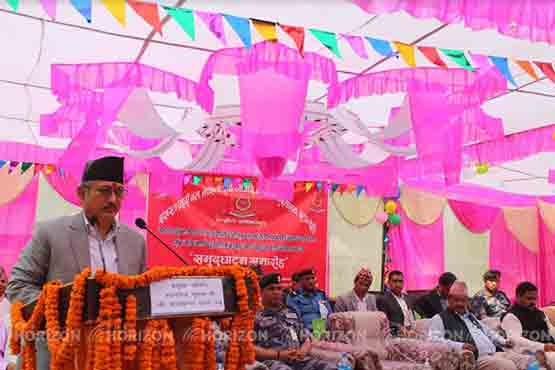 Nepal: Home Minister Bal Krishna Khand has said that good governance has been maintained in Nepal after the establishment of the Armed Police Force. Armed Police Force Nepal no. 5 Addressing the inauguration ceremony of the Vindhyawasini Bahini headquarters.

As various castes live in the Terai-Madhesh, the local castes are the border guards of the country, said Minister Khand. Referring to the MCC issue, he said that various agitations had taken place in the country and the Armed Police Force (APF) had managed to maintain peace and security in the country despite being injured in the agitation.

Stating that the role of security personnel would be significant in holding the local elections in a fear-free environment, he urged the people not to have any doubts about the election. Stating that the Armed Police Force has worked hard for the security of the country, Khand also wished that the Lumbini Province Force would become the strongest force in Nepal.

Meanwhile, Inspector General of Armed Police Shailendra Khanal said that 41 VOPs have been set up in Lumbini and 17 more are being prepared for the current fiscal year. Stating that the Armed Police Force is always ready to protect national integrity, he said that additional border outposts should be set up to create a credible environment of peace and security in the border areas. Similarly, Deputy Inspector General of the Armed Police, Kul Bahadur Nemwang, said that the headquarters, spread over a total area of ​​50 acres, has units in 12 districts of Lumbini.