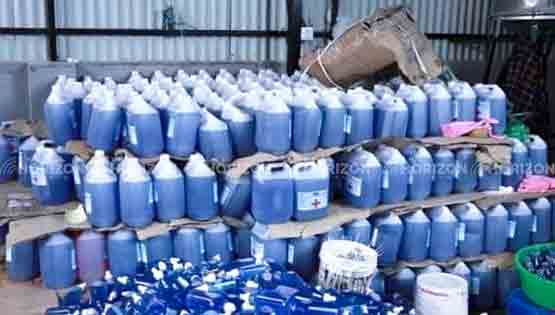 Lalitpur, Nepal: The factory has been running illegally for producing duplicate sanitizer located at Lalitpur, Imadol of Mahalakshmi Municipality ward no. 4 situated in Shital Height has been raided by the police.

He said that the raid was carried out on the basis of information that unsanitary and low-quality sanitizers are being produced, sold, and distributed for public uses.

SSP Khapung also said that the sanitizer during the test was found to be extremely harmful and toxic to health. He said that legal action would be taken against the culprits.

He said that the main dealers and suppliers including the factory have also been taken under control. Police said the factory could contain 30,000 liters of duplicate sanitizer.