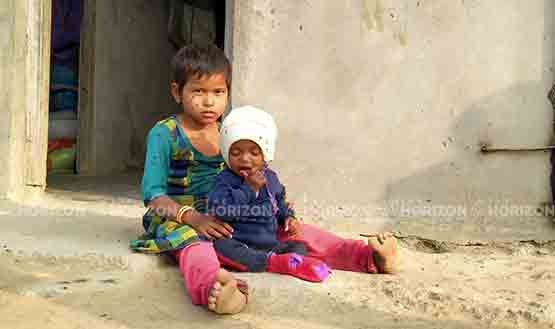 Explained! How Corona ruined the future of toddlers, The Horizon Times, News of Nepal

Nepal: A child of the Vijayanagar rural municipality of Kapilvastu has been becoming helpless in a difficult situation lately. After the death of the Covid-19 infected woman, the rural municipality had taken the responsibility of taking care of the one-month-old newborn with the necessary nutrition for six months. Rural municipality ward no. 1, Hanumannagar resident Punsiram Chaudhary’s 1-month-old son Govind Chaudhary was handed over cash last May for care.

The baby is now 8 months old. However, family sources have stated that they have been living a very difficult life till the end of the ten-month period when the responsibility of care taken by the village municipality is over. Home farming is very low. It is difficult to have a common morning meal. You should not eat without wages. The deceased’s elder sister Savita Tharu had been taking care of the newborn for the past few months. Chaudhary’s brother-in-law Savita had helped to take care of the child for so long.

Munsiram has recently gone to neighboring India for employment. The money he earned by working there has made it very difficult for him to raise his children at this time. From time to time he comes home. Munsiram is in a dilemma after his wife, who has been earning money in the Gulf for many years, was smashed to pieces in an instant. Now he has neither been able to teach his children nor take care of them. Munsiram’s 7-year-old daughter Sapna Tharu has been forced to stay at home playing with her child (brother) at the age of reading and writing. There are tears in my eyes when I see my friends going to school. And if the child does not get nutritious food including milk in time, it has been found that the fingers of the hand are sucked and melted with flies.

Rural Municipality Chief Gopal Bahadur Thapa said that the responsibility taken by the municipality for the care of newborns has been fulfilled. Stating that he has fulfilled his responsibility for six months, he said that he will monitor the child in the coming days on related issues including education and health.

Meanwhile, Punsiram’s brother-in-law Savita Tharu has said that she will not be able to take care of another child as she has her own baby. She said that the rural municipality oath to take care for six months but only took care for five months. She said: “I’ve been caring for that baby for so long, now I have a baby so I can’t.”

Similarly, YP Adhikari, chief of the municipality health branch, said that the basic services have been provided to the infants effectively. He said that even the parents received the cash required for the care of the baby. The official also said that it is important to make the environment conducive for the children, adding that the rural municipality will monitor the child and give priority to additional care.

There are 3 members in the family including Mr. Punsiram Chaudhary, 1 daughter, and 1 son. The family situation has been normal and they have been earning wages. A 25-year-old woman was sent to Lumbini Provincial Hospital, Butwal for treatment after her corona was confirmed during an antigen test on May 15. She was referred to Taulihawa Hospital on May 20 and died on Saturday.