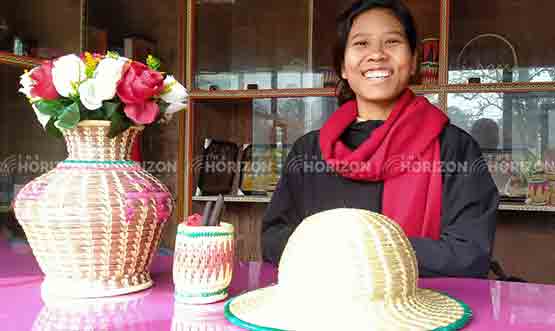 How Gyanu Tharu is protecting Tharu culture? The Horizon Times, News of Nepal

Nepal: The most popular handicraft items of the Tharu community are covered. Along with Dhakiya, Mauni such materials that have been used by the Tharu community in the past are disappearing. Today’s need is to abandon negative behaviors and follow the customs and rituals of handicrafts that have a positive impact on society. It should be borne responsibly by the younger generation.

A 27-year-old girl from Kapilvastu has become an example by carrying such responsibility. Gyanu Tharu is a young woman from Budhbhumi Municipality, Ward No. 9, Barkulpur. Over the past few years, she has learned the skill with the help of organizations including KIRDARC Nepal. Growing up in a normal family, she continued her skills along with her knowledge and gained experience by reaching the bachelor’s level. The products produced by using local resources have created employment opportunities and become their main source of income.

Sharing the experience with friends, some friends, and some family support and laughter has given Gyanu a professional look. Home-made handicrafts were traditionally kept, but a few days ago she dared to turn them into commercial handicrafts. During their leisure time, the women of the Tharu community use the Muj (hay) found in the forest and the Pearl (plastic granules) and threads available in the market to make the Dhakiya by hand.

Growing up in a rural family, Gyanu is now able to stand on her own two feet. “We have been making handicrafts in the traditional way since ancient times, but now we have to do it in a modern way,” she said. She said that for the first time, her family and friends suggested her move into this field.

Stating that the younger generation of the Tharu community has been avoiding taking responsibility lately, she said that the youth should take the lead of the society. As it is a local item, she says, she used to come to buy items such as Dhakiya, Pen Holder, Rati Dani, Topi, Lenhaga and Tharu jewelry from external customers.

Tharu, who is coordinating with organizations in Kathmandu, said that she would promote the locally produced items and activities in order to promote Tharu handicrafts. Stating that the foreign receivers are more attractive and the purchases are better than the Nepali customers, she said that her plan is to create employment opportunities for the locals by producing the necessary materials keeping in view the demand of the common people. Stating that there are six families in the house including mother and father, she said that she is earning a satisfactory income from the shop.

Similarly, local Hemant Tharu praised Gyanu for doing a great job for the Tharu people. He said that it has played a role in awakening the identity of the Singa Tharu community not only in this region. Hemant also mentioned that employment opportunities have been created by using local resources and there is a good source of income.