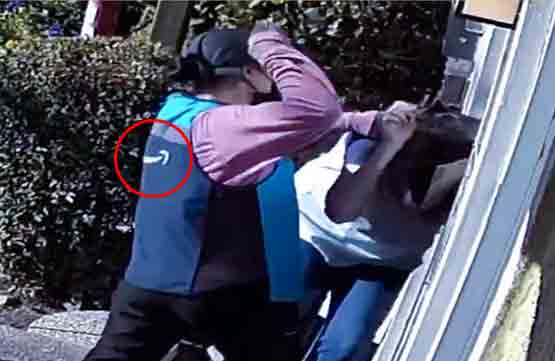 In California, an Amazon delivery driver was captured on video hitting an elderly woman repeatedly

California: During a quarrel over a delayed shipment in California, an Amazon delivery man was captured on tape hitting a 67-year-old client, according to KTVU Fox 2.

The driver is seen hitting the victim many times around her head on video. A security camera filmed the event, which occurred in Castro Valley, from multiple angles.

Iztel Ramirez, an Amazon employee, was jailed on Thursday. According to KTVU Fox 2, the elderly woman’s residential building’s owner, Doug Smith, the dispute began when she received word that a parcel had arrived. But when she went to the lobby to look for it, she couldn’t find it.

The woman inquired about its location, and Ramirez assured her that she would receive it soon. The woman allegedly questioned Ramirez again after waiting 15 minutes, resulting in a violent altercation.

“I believe the Amazon driver muttered something about ‘your white privilege,’ and my neighbor answered, ‘You don’t have to be a b***h about it,’ turned around, and walked away,” Smith was reported as saying.

An Amazon spokeswoman said: “This does not reflect the high expectations we have for package delivery drivers. This individual is no longer delivering Amazon packages because we take these problems seriously.”

According to the Alameda County Sheriff’s Department, the woman had a broken nose and other noticeable wounds.

“We can’t have our delivery drivers or anybody out there in the community attacking folks, hitting individuals in the face,” Sheriff Ray Kelly told KTVU Fox 2.

According to the site, Ramirez was detained on accusations of violence inflicting serious physical injury and disrespect. The bail amount for her has been set at $100,000.