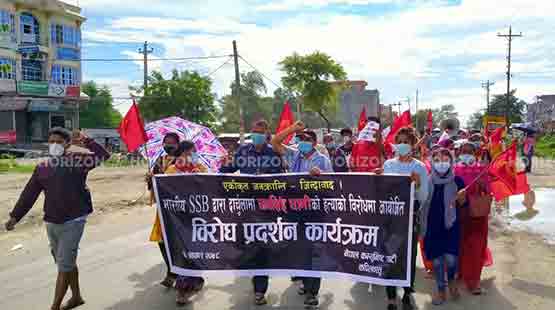 Kapilvastu: The CPN (Biplav) led by Netra Bikram Chand has protested against the murder of missing Jaisingh Dhami. According to the Shivaraj Nagar Committee, the CPN protested in Chandrauta on Saturday saying that the government of Nepal should investigate the incident.

While crossing the Mahakali River in Darchula, Jaisingh Dhami of Byas Rural Municipality Ward No. 2 was swept away. He flowed into the Mahakali while crossing the Tuin on his way to India from Nepal. According to eyewitnesses, the incident took place when the Indian Armed Border Security Force (BSF) cut the Tuin.

The Chandrauta Armed Police held a rally from the checkpoint to the municipality and turned it into a rally. Most of the speakers at the rally said that attacks were being carried out in a systematic manner in Nepal, adding that it was important for the government to be aware of the tragedy and conduct an impartial investigation so that the victims could get justice.

Narayan Chand, District Branch Secretary of Biplav Central Office, informed that the Government of Nepal must take action against the participants in the incident and force the Indian government to investigate the action.