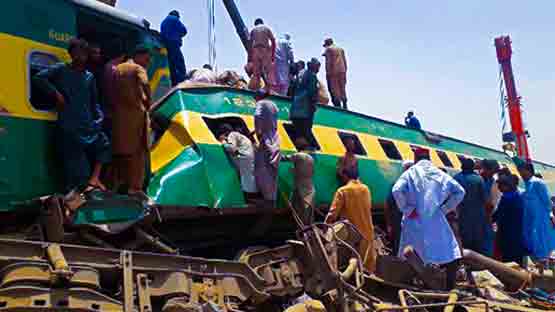 More than dozens died in terrible train crash in Pakistan

Islamabad: Following a train incident in southern Pakistan on Monday morning, dozens of passengers were killed and many others were wounded.

As per railway officials, the Sir Syed Express train clashed with the Millat Express train between railway stations in Sindh province.

According to Edhi Rescue Services, at least 45 people have died, and authorities are attempting to save at least 17 individuals who are still stuck. 23 people have been evacuated so far.

Pakistani Prime Minister Imran Khan expressed his condolence to the victims of Monday’s train tragedy and announced that a thorough probe into railway safety would be conducted.

“Astonished by the horrible train disaster at Ghotki early this morning that claimed the lives of 30 people,” Khan wrote on Twitter, adding that he had urged the Railway Minister to see that the wounded were treated and that the families were informed.

Azam Khan Swati, the Minister of Railways, announced on Monday that he had started an investigation into the crash’s reason, with a representative for the ministry stating that the initial probe will be finished within 24 hours.

Pakistan’s railway system has a dismal track record in terms of safety, with a string of serious crashes in recent years serving as a painful reminder of the country’s outdated equipment and safety concerns.

A fire consumed a train moving through Rahim Yar Khan, in Punjab province’s south, in October 2019, killing at least 70 people and injuring another 30. The fire started when a gas cylinder that passengers were using to prepare breakfast detonated.

Last July, an accident between a bus and a train in Punjab’s Sheikhupura area killed at least 20 members of a tiny Sikh community coming on a trip.

A cargo train clashed with a passenger train in Karachi, Pakistan’s commercial hub, in 2009, killing 12 persons and injuring 19.