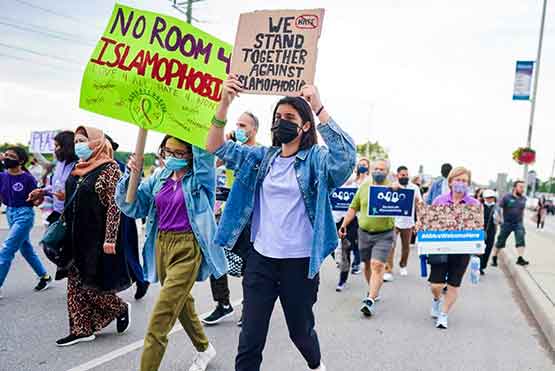 Canada: Thousands of people turned out for an interfaith march on Friday evening to remember the 4 members of a Muslim family who lost life in a shocking attack in Canada.

The parade began at the location where three generations of a family out for a Sunday evening stroll — 46-year-old Salman Afzaal, his 44-year-old wife Madiha Salman, their 15-year-old daughter Yumna Salman, and her 74-year-old grandmother Talat Afzaal — were killed while waiting to cross the street in London, southern Ontario.

Fayez, the pair’s nine-year-old son, was injured seriously but not fatally. The anti-racism and anti-Islamophobia march ended at London’s mosque, which is around 7 kilometres (4.5 miles) away.

Drums were banged by the marchers, which included families with kids, while others sung John Lennon’s “Give Peace a Chance.”

They held signs that read, “Hate kills” and “We’re all human.” Following a moment of silence to commemorate the tragedy, religious leaders spoke out against bigotry and praised the wave of solidarity for London’s 30,000-strong Muslim community.

Other demonstrations or vigils were held in Canada on Friday in Toronto, Ottawa, Montreal, and Quebec, where six people were killed in a mosque attack in 2017.

The memorial for the Afzaal family is set for Saturday afternoon. In the truck attack, Nathaniel Veltman, 20, has been charged with four charges of first-degree murder and one count of attempted murder. If convicted, he might spend the rest of his life in prison.

The attack in which Veltman’s truck mounted a curb and attacked the Afzaal family has been labelled a “terrorist action” by Prime Minister Justin Trudeau.

The inquiry’s main detective, Detective Superintendent Paul Waight, has stated that there is proof “that this was a planned, calculated act, driven by hate.”