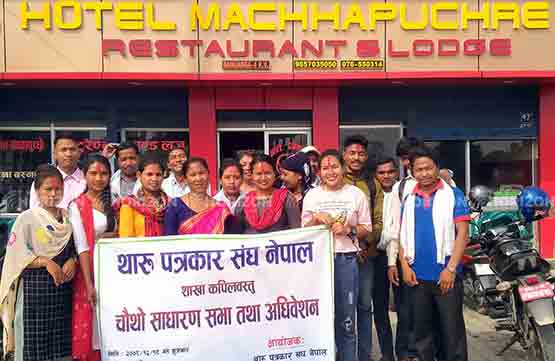 Nepal: A new 13-member leadership including Sarita Tharu has been elected under the leadership of Tharu Journalists Association Nepal Kapilvastu. It is said that the association got new leadership from the 4th general assembly and convention held in Jitpur, Char Number on Friday.

Meanwhile, TJA Central Secretary Kamal Chaudhary said that Tharu journalists should play an active role in addressing the demands of the Tharu community. He also said that media persons need to play an important role through pen to revive the existence of their society. Tharu urged for investigative journalism as well as content that reflects the owner’s identity within the Tharu community.

Central Secretary Tharu said that the media personnel was working day and night to bring justice to the victims of injustice along with raising the voice of the oppressed in society. He also congratulated the newly elected office bearers and wished them success.

Similarly, Sumitra Tharu, a central member of the Tharu Welfare Assembly, said that the demands of TJA and TWA were almost the same and that it was important for both of them to work together. She said that it was important to build good relations between the two associations for the realization of the rights of the community. Stating that there is nothing impossible if we cooperate, member Tharu stressed the need to continue the discussions in the coming days.

It has been decided to send TJA founding chairpersons Sitaram Chaudhari, Uma Shankar Tharu, and Dwarika Prasad Tharu from Kapilvastu as councilors from the convention. Most of the speakers in the program have expressed confidence that effective steps will be taken with a positive message after the leadership of women this time. Earlier, only men had been leading TJA in Kapilvastu.