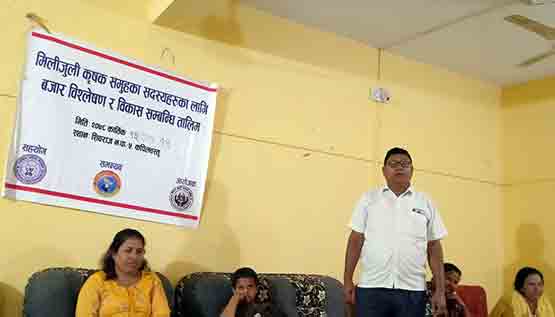 Effective Market and development training to farmers, The Horizon Times, News of Nepal

Kapilvastu: Members of Milijuli Farmers Group have been provided training on market analysis and development. The training was provided for one week in Shivaraj-5, Chandrauta of the district with the support of the National Dalit Network under the coordination of Diyalo Nepal.

Chairman of Shivraj Municipality Ward 5 Arjun Pandey while addressing the concluding program on Friday said that the training has given more energy to the farmers. He said that it would be easier for the farmers now as there was a problem in increasing production and a lack of knowledge about the market.

Chairperson of the Dalit Monitoring Committee Mina Pariyar said that emphasis should be laid on income by making agriculture a business. She said that the training was given as per the demand of the farmers who had problems due to a lack of knowledge.

It is said that the training was conducted with the participation of 31 participants. Participating farmer Rajmati Koiri expressed her commitment to learning a lot from the training and put it into practice.