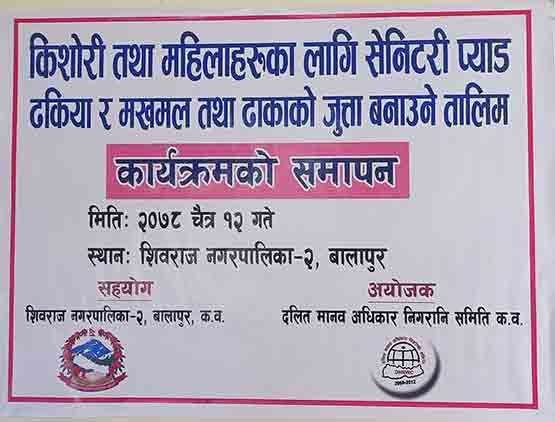 Skills for women to become self-reliant, The Horizon Times, News of Nepal

Nepal: Training on making sanitary pads, Dhakiya and velvet, and Dhaka shoes for teenagers and women has been completed. According to the organizers, it was completed on Saturday in Shivaraj Municipality Ward No. 2 of the district.

Addressing the program, Ward Chairman Ram Bahadur Chaudhary said that it was necessary to put into practice the skills learned. Stating that they will not be self-reliant only through training, he also stressed the need for women to move forward professionally. Expressing confidence that SIP would make a significant contribution to economic prosperity, he expressed his commitment to market it as much as possible.

Meanwhile, Mina Pariyar, chairperson of the Dalit Human Rights Monitoring Committee, said that emphasis should be laid on achieving efficiency keeping in mind what the trainers have taught. Stating that self-reliance has started even after the completion of the training, Pariyar said that such programs would encourage women in rural areas in the coming days.

The ten-day training was attended by 38 local teenagers and women. Nirmala Thapa informed that trainers Jyati Pun, Tarawati Chaudhary, Hiramanti Tharu, and others provided training during the training period.