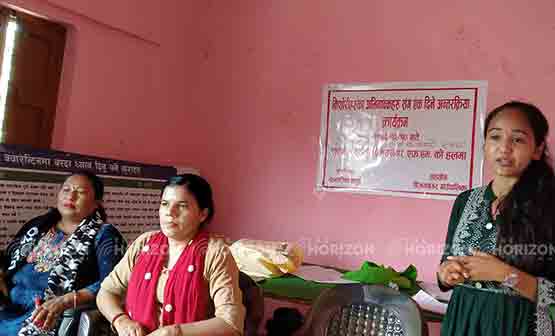 Interaction with parents about adolescence, The Horizon Times, News of Nepal

Nepal: A one-day interaction program has been organized with the parents of the adolescents in Vijayanagar rural municipality of Kapilvastu. According to the organizers, there is an interaction between parents and adolescents regarding the role of parents in adolescence.

On Thursday, an interaction program was organized in ward no. 6.

Laxmi Kumari Chaudhary, Vice-Chairperson of Vijayanagar Rural Municipality, while addressing the program, said that adolescent condition is more sensitive and risky than other conditions. She also said that parents need to pay special attention to this situation. As the adolescents are weak in the decision-making process of what to do and what not to do, the parents should play an appropriate role at the right time, said Vice-Chaudhary. She urged the people to be vigilant to avoid and prevent various criminal activities including violence against women, sexual abuse, and trafficking of girls.

Meanwhile, Parvati Acharya, chairperson of Sancharika Group, said that adolescents should be aware of any risky incidents that may occur during adolescence. She said that especially teenagers are the victims of trafficking and it is important to be careful not to fall prey to strangers and any temptation. Acharya requested to inform the police and concerned bodies as soon as she is suspected of abusing and engaging in criminal activities.

Similarly, Nisha Bishwakarma, the trainer of the interaction program, imparted training on the dangers of adolescence, human trafficking, sexual violence, mental changes in adolescence, and thinking with the participation of 46 local adolescents and mothers.