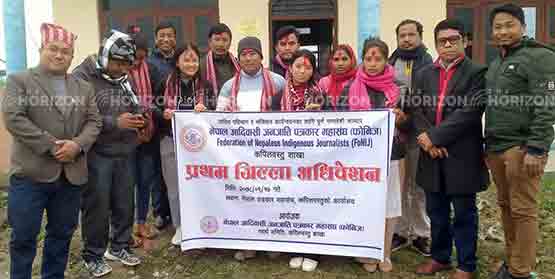 Nepal: The first district convention of the Federation of Indigenous Journalists, Kapilvastu has concluded. The convention held in Taulihawa on Saturday has formed a new 13-member working committee under the leadership of Shailendra Shrestha.

Lumbini State President Milan Gaha said it would play an important role in full inclusive communication for ethnic identity and implementation of the constitution. He said that it was important for the indigenous journalists to unite to address their ethnic demands. Urging the media persons affiliated with their committee to take the lead in investigative journalism, Chairman Gaha congratulated the newly elected office bearers and wished them success.

Meanwhile, Kiran Man Bajracharya, president of the Federation of Nepali Journalists, Kapilvastu, while addressing the program, stressed the need to raise the voices of the victims of injustice and oppression. Stating that the journalist should play a professional role without being distracted, Bajracharya also expressed his commitment to fully support Fenij in the federation and personally.