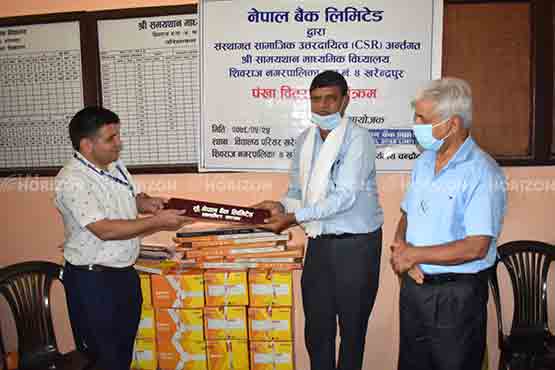 Handing over a fan at a program organized at Samaythan Secondary School under corporate social responsibility, Chief of Shivraj Municipality Netra Raj Adhikari said that some money should be spent on social work now even though banks only do money transactions. Expressing gratitude to Nepal Bank for providing fan support to a school in teaching students, he urged other banks like Nepal Bank to invest in various social activities.

Similarly, Lumbini Province Chief of Nepal Bank, Lekhnath Bhusal, said that the bank has worked in the field of education, health, and other sectors every year under its corporate social responsibility. He said that the school was selected as it was difficult for the students to study in the summer season due to a lack of fans.

The principal of the school Giri Prasad Gaire thanked the school for providing electrical materials. He said that after the connection of these fans, teaching activities will be easier as the newly constructed structures and old electrical materials have deteriorated. The program was also attended by school management committee officials, teachers, and local people’s representatives.