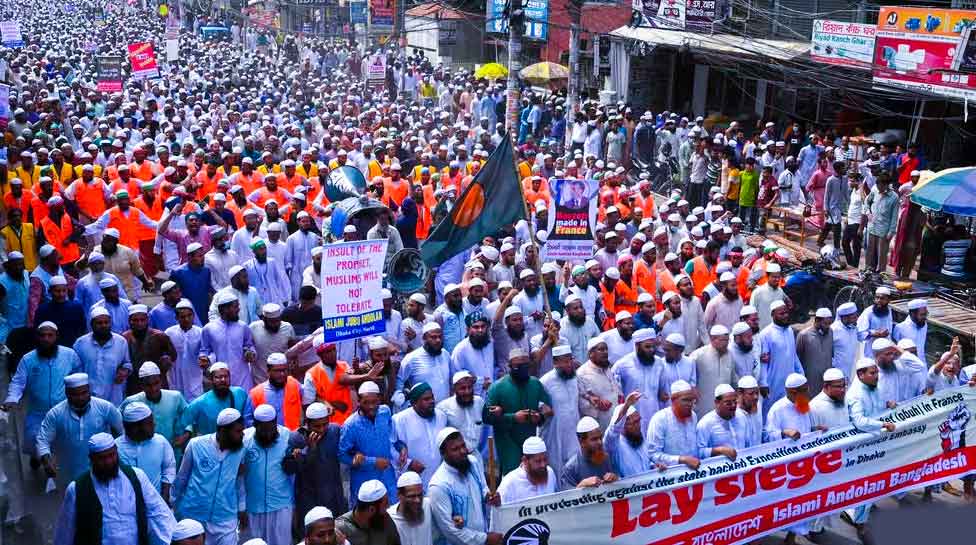 In recent days, there has been outrage in Muslim countries against French President Emmanuel Macron.

Protests against him, exploitation of his idol and boycott of French goods have also started at the grassroots level along with the head of government.

A massive demonstration against Macros took place in the Bangladeshi capital Dhaka on Tuesday. According to AFP, more than 40,000 people took part in the protest, which was organized by the Islamic Movement of Bangladesh.

A few days ago, Samuel Patty, a teacher in France, was assassinated after showing a cartoon of Mohammed to students. President Macron said showing such cartoons was freedom of expression.

In early October, Macron said Islam was a crisis religion and that it needed to be restructured to protect the French.

Protesters in Dhaka on Tuesday tried to reach the French embassy. The police had stopped them.

“Macron is one of the few Satan-worshiping leaders in the world,” Ataur Rahman, a member of the movement, told the protesters. He called on the government to expel the French ambassador.

Another leader, Hassan Jamal, warned that if the ambassador did not leave the country, they would remove the bricks from the embassy one by one.

“France is the enemy of Muslims. And those who represent them are also our enemies,” said Nasil Uddhin, a young leader of the movement.

Though the police dispersed the protestors but they made another movement in other street. “Boycott French goods” was the thrilling slogan of the protesters.

Pakistan’s parliament has passed a resolution to bring back the ambassador from Paris.

Demonstrations have also taken place in Gaza, Iraq and Turkey. Saudi Arabia has also opposed linking Islam to terrorism. The issue of boycotting French goods in supermarkets is being tendered on social media.

PUBG is coming back to India?