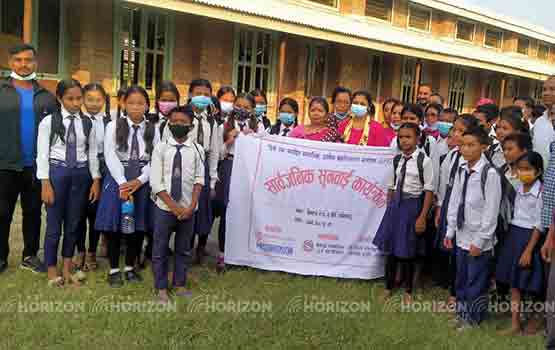 Kapilvastu: The public hearing program of Siddhartha Basic School has been completed. A public hearing of the school at Khairi in Shivaraj-5 of the district was held on Monday.

Addressing the public hearing program, ward member of Shivaraj Municipality-5, Jayas Mohammad Mia praised the work done by the school. Stating that emphasis has been laid on quality education, he said that it has made a big leap compared to the past. Mia said that Siddhartha Vidyalaya has been playing a very good role in the education affected by Covid-19 for some time now.

Parents and teachers have a big role to play in making education effective, said Surendra Chaudhary, president of Siddhartha Basic School. He also said that the issues raised about the overall condition of various physical construction schools will be addressed.

The school, which was established in 2045 BS, has 523 students, 13 teachers at different levels, drinking water, toilets, child-friendly classrooms but the playground needs to be organized. Manju Rani Niraula, the headmistress of Siddhartha Basic School, said that Rs. 49.89 million was spent. Prem Sunar, president of the Teachers ‘and Parents’ Association, and Man Bahadur Sunar, a member, urged all to take initiative for the provision of computers to take the current changing education through the computer.

Speaking at a public hearing organized by Siddhartha Basic School with the special support of Storm Foundation and KIRDARC Nepal, Binod Kewat, Community Development Officer of KIRDARC Nepal, said that the organization would continue to work together in the future. Student Radhika Kori and Supriya Khanal had complained that the sanitary pads were not of good quality even though they were available.