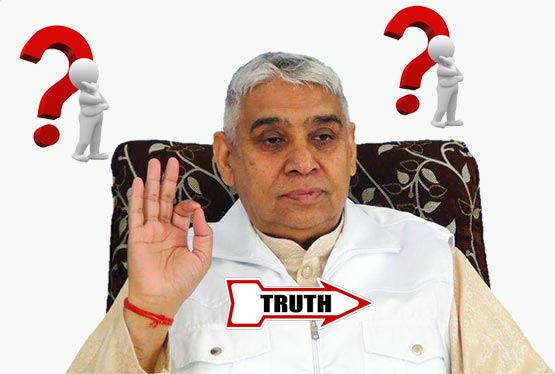 Reason why millions of followers are catching track of Baba Rampal

Kathmandu: We don’t know when human civilization has started and we are also unknown about the several facts of human mysteries. There are scientific and spiritual facts about human civilization but all are only hypothetical. None of the proof is authentic.

With the human assumption, we can only imagine when religion started and it’s all like an empty thesis. We know this planet is divided into loads of religions and customs. But do we know who created it? As per the religious scripts, God created it.

The clerics of that religion forecasted to their community. In Hindu, Gita, Puranas, and Vedha, in Muslims Quran Sheriff, In Christian Bible, In Buddhists Tripitak and in Jainism, Guru Granth Sahib are valued holy books. According to all these scripts, this entire universe is created by God.

Very true, but there is the secret question, Is that god true who delivered the knowledge with different theories. People say God is one and why there are many theories.

Here is a crystal clear answer from Baba Rampal.

As per Baba Rampal Ji, the only ambition of human life is to attain salvation. But how? Now let us move a step ahead towards Baba Rampal’s spiritual teachings as per the Holy scripts.

Humans are born and die which is a universal truth. But do we know why there is death? Everyone deserves to be wealthy, healthy, and stress-free. You will find no one on this entire planet satisfied.

Our wishes are never fulfilled because humans are like puppets that are compelled to be born and die and forced to suffer in 84 lakhs death birth cycle. This formula is regulated in all religions.

If God cares about us, why he kills us. A true god never leaves his soul suffering. Or maybe to whom we are worshiping as a god, he is something else.

Baba Rampal preaches as per holy scripts from Gita, Vedas, Quran, Bible, and Guru Granth Sahib. In Vedas, it is clearly illustrated that Supreme God erases the sin of human souls.

He never has birth and death. But what clerics of Hindus say, sin cannot be terminated. If we believe Vedas, Puranas, and Gita are true then these clerics are false. In Shiv Puran, Shree shiva Ji accepted that Brahma, Vishnu, and he have birth and death.

So why these Hindu clerics are propagating false statements and misleading the people elaborating them as immortal. We hope you are now clear.

As per Gita Ji those who worship against holy scripts, never attain salvation nor have pleasure. These all the secret truths are revealed by spiritual Leader Saint Rampal Ji Maharaj.

This same theory is propagated in Bible whose truth is also revealed by Rampal Ji Maharaj. Hence he is regarded as an elementary saint who has secret knowledge of each religious holy script. None of the clerics on this planet have explained with proof.

Today’s generations are well educated. All the secrets are scripted in each Holy script. One should read by themselves and compare with the teachings of Saint Rampal Ji Maharaj. You will get hell and heaven difference.

In short, the clerics have misled the people and spread false propaganda of worship.

These all secrets are well described in the books of Saint Rampal Ji Maharaj. You can download it free from here.

Also if you need a hard copy free of cost, send your personal details like Name, Address, Zip-Code, Country, and Mobile number in this Whatsapp number +91- 7496801823.

Hence millions of people are following Saint Rampal Ji Maharaj because they have understood the truth of their Holy scripts. A large mass of people from Hindu, Islam, Jain, Christians is taking Name Initiation. They are graced with the blessings of Maharaj Ji.

Rampal Ji Maharaj guarantees salvation if one will follow the principles in his/her entire life.

If you have any doubt or need any further information, visit the official website of Maharaj Ji
www.jagatgururampalji.org.

Please see the testimonial’s video and some of the pious secret words from Saint Rampal Ji Maharaj.