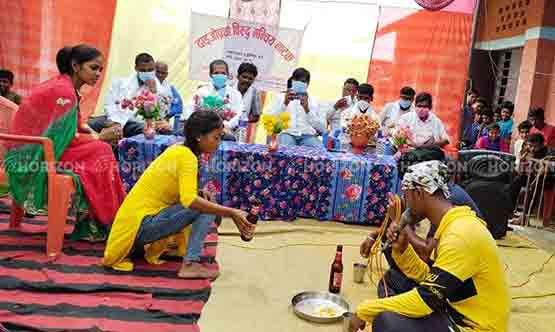 Stage drama program against dowry disaster in a village of Nepal

A stage play against dowry was held under the chairmanship of Jawahir Kewat, Chairman of the Dialogue Cooperation Committee and the chief guest of Buddha Prakash Poudel, Chief Administrative Officer of Sarawal Rural Municipality and Arjun Poudel of Sarawal Agriculture Branch.

Speaking on the occasion, Chief Guest Poudel said that dowry is a heinous crime. However, the practice of dowry transactions is widespread in our society. Parents have to work very hard to get their daughters married. But the same boy’s side aggravates the problem by taking dowry. And that creates a situation where the bride has to get married with a loan.

He said that it was necessary to hold such programs to solve such problems and end the growing practice of taking dowry in society. And he said he would raise his voice against the dowry system.

Speaking on the occasion, ABC Nepal Supervisor Saida Nisha Pathan said that in order to end the practice of taking dowry, it is necessary for all of us to raise awareness among the people from our own homes, neighbors, and the community.

There was the participation of teenagers as well. The program was conducted by Durga B.K, a volunteer of ABC Nepal.