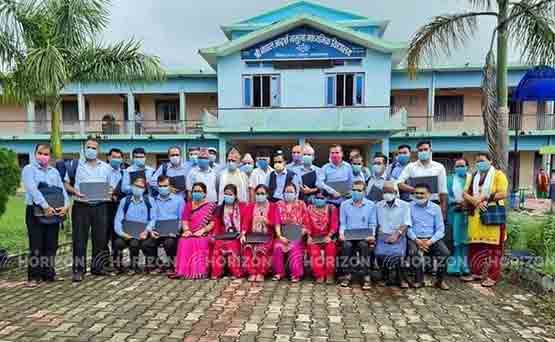 Teachers distributed with laptops and new building to be erected to scale educational status, Nepal

Nepal: Laptops have been distributed to 33 teachers of Nepal Aadarsh Secondary School. The school has distributed laptops to 33 teachers in the educational management of the existing school in Shivaraj Municipality-1 of the district.

It is said that the program from physical construction to educational development has been completed in the school at a cost of Rs. 15 million under the model school development plan.

Meanwhile, inaugurating the building, Mayor Netra Raj Adhikari said that the government’s investment should be utilized to bring quality in education. He said that the two-storey building, toilet, drinking water have been provided to the teachers and laptops as well.

Adhikari thanked the school management committee and teachers for developing the school as a model of the district.

The city chief urged the teachers to use the school structure and facilitate teaching and learning through laptops. The mayor informed that the students should be given special attention.

Chief of the Education Branch of Shivaraj Municipality, Lokraj Panthi, said that attention should be paid to the all-round development of the school as various faculties would be taught in the school. He said that the learning would be effective if the students could be taught in a way that would make them comfortable.

Chief of the Shivraj Municipality Netra Raj Adhikari inaugurated the eight-room two-storey building constructed from the project on Sunday. Bhawan Raj Poudel, chairman of the school management committee, said that the unfinished building was completed, new building was constructed and toilets were constructed at a cost of Rs. 10 million.

According to Chairman Poudel, the model school was selected in 2074 B.S and is continuously developing the school’s educational activities from the school structure. The mayor has also monitored the school’s science laboratory, library, animal science, computer lab, and old and new structures.