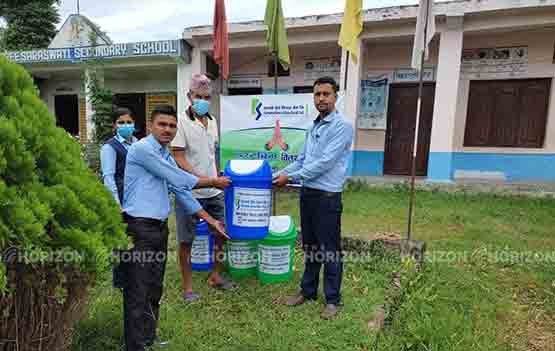 To clean the school atmosphere, dustbins are handed by Kamana Sewa Development Bank, The Horizon Times, News of Nepal

Similarly, Saraswati Higher Secondary School, Principal Bikram KC thanked the bank family for accepting the dustbin and said that it would help in the cleanliness of the school. Similarly, it was handed over to Chhand Bahadur Singh KC, Chairman of Saraswati Basic Management Committee, and Namdev Khanal, Chief of Samaythan Multiple Campus, said Luitel.

Similarly, accepting the dustbin, Campus Chief Khanal said that no one has provided such assistance to the campus so far, adding that it would help in sanitation. He thanked the bank for handing over the social responsibility and urged the bank to be more active in such social activities in the coming days. Khanal also mentioned that others need to learn a lesson from this.