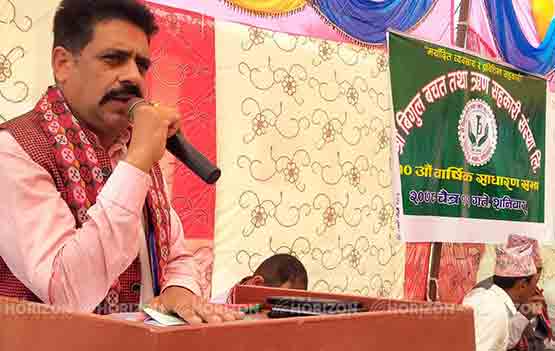 Nepal: The 10th Annual General Meeting of Bigul Savings and Loan Cooperatives has been concluded. The cooperative located in Shivaraj Municipality Ward No. 3, Madawa has been praised for providing social loans to the citizens and doing social work.

Addressing the general assembly on Saturday, Lumbini province assembly member Arjun Kumar KC said that cooperatives would play an important role in changing society. He said that the money scattered in the society is collected and made available to the citizens.

Stating that the cooperatives have managed to carry out tens of millions of rupees in a period of ten years, he suggested carrying out social activities. He stressed the need to conduct skill-based training to increase the capacity and self-reliance of the members of the cooperatives. KC said that some problems have been created in the economy due to Covid-19.

Likewise, Ward Chairman Teklal Sapkota said that cooperatives have been established in all areas of the ward and they have been inculcating the habit of saving among the citizens. As education is essential for the development of all sectors, Ward said that it is working every year with an emphasis on education. Meanwhile, Mahadev Pokharel, president of the Trade Association Kapilvastu, said that Bigul Cooperative has achieved good results in a short period of time.

Manager Gyan Bahadur GC informed that the cooperative had a turnover of Rs 38.3 million. He said that there was some inconvenience in the operation of cooperatives due to Coronavirus last year. Chairman of the Cooperative Nar Bahadur Poudel, Vice Chairman Kopila Neupane, and Bel Singh Rawat addressed the gathering.