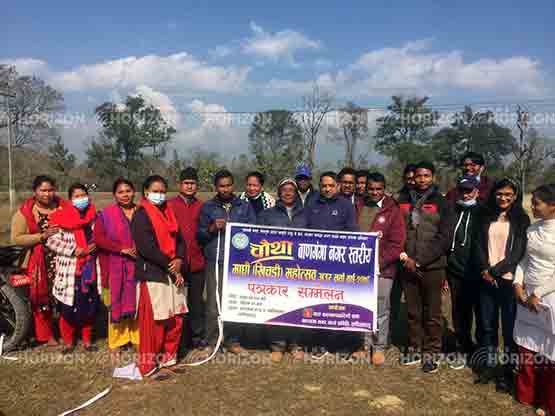 According to the organizers, the Tharu Kalyankarini Sabha Banganga Municipal Committee has completed all the necessary preparations for the 4th Banganga Municipal Level Maghi Festival to be held on January 2, 3, and 4 by holding a press conference on Monday.

Similarly, Minister for Tourism, Rural and Urban Development Dilli Chaudhary will inaugurate the Maghi Festival this year, said city chairman Bhaggu Prasad Tharu. He said that the Maghi Festival would be celebrated in Kapildham this year with the motto of ‘Our Language and Culture, Nation’s Glory, Protection and Promotion Campaign’.

Tharu Kalyankari Sabha Municipal Chairman Bhaggu Prasad Tharu presided over the function, which was welcomed by Vice-Chairman Rishi Ram Tharu and conducted by journalist Kamal Chaudhary. This year, the festival will have an exhibition of various materials reflecting the language, art, and culture of the Tharu caste and a class of Tharu food items.

The festival will also feature an exhibition of various Tharu dances and Jhanki, the organizers said at a press conference. During the festival, Jhumra, Jharra, Badka dance, Lathi dance, Peacock dance, Sajani Birhani and record dance competitions will be held to reflect the Tharu culture.

Similarly, on the eve of Maghi festival, a massive blood donation program will be organized on January 15 and the elderly will also be honored at the Maghi festival, said Chairman Bhaggu Prasad Tharu.