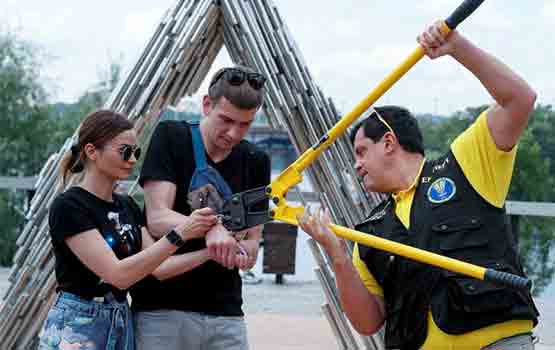 Ukraine: To save last save their love, a Ukrainian couple was tied together for 123 days.

It was a complete failure.  Alexandr Kudlay and Viktoria Pustovitova formally split in May after bolt cutters were handed out and their shackles were cut.

The couple’s eventual separation was broadcast on Ukrainian national television.

When the handcuffs were removed, Pustovitova, 29, exclaimed, “Hooray!” according to the New York Post. “At long last, I’m free.”

As per Reuters, the pair from Kharkiv, Ukraine’s eastern metropolis, had a history of splitting up and reuniting.

Kudlay, 33, came up with an idea for the handcuffs. They officially began the trial on Valentine’s Day.

During their three months in handcuffs, the pair did it all together and documented their adventure on Instagram. They shared showers and smoke breaks, and they took turns using the restroom.

The couple also collaborated, prompting Pustovitova to leave her employment as a beautician. Clients were uncomfortable with Kudlay being there at meetings, according to the New York Post.

According to Reuters, rather than uniting them, the event ultimately tore them apart.

As per The Daily Mirror, the pair argued more frequently and for longer periods of time, with one fight lasting four hours.

The pair concluded they weren’t suitable, and on May 19, they broke the handcuffs to end their affair.

Kudlay told Reuters, “We are not on the same page.” “We’re polar opposites.”

While Kudlay and Pustovitova are no longer boyfriend and girlfriend, they have set the world record for the longest time a couple has ever spent chained up, according to a spokesperson from a Ukrainian record book.

As per the New York Post, both Kudlay and Pustovitova are now single and live in different parts of Ukraine.

According to Reuters, they intend to sell the handcuffs and donate a portion of the proceeds to charity.

“I believe it will serve as a good teaching for us, other Ukrainian couples, and couples throughout the world not to repeat what we did,” Pustovitova told Reuters.