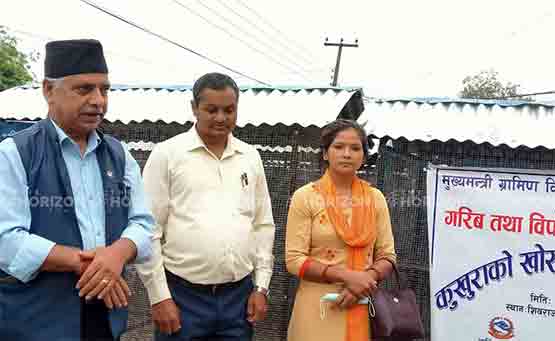 He also said that the land constructed at a cost of Rs 600,000 would provide financial support to needy families.

Addressing the Chief Minister Rural Development and Employment Program, Shivraj Nagar Chief Netra Raj Adhikari said that the families would be self-reliant. He said that the development would be done by creating a pocket area that would increase employment and provide financial assistance.

The official said that the slogan “Happy Nepal, Prosperous Nepal” would be meaningful. Stating that the money invested by the government will be used properly, it will have a positive impact on the family level, said the municipality chief.

Meanwhile, Shiva Kumari Tharu, Deputy Chief of Shivaraj municipality, said that the needy citizens of Bhitariya would be self-employed by raising commercial chickens targeting the historic tourist site of Sonwagadh. She said that the investment made with the objective of raising the standard of living in rural areas would be effective.

She also clarified that Bhitariya village has been selected keeping in view the number of people going for a picnic and visiting Sonwagadh temple which is a tourist destination.

According to Tharu, the impoverished families living near the forest will no longer be forced to work far away for employment and an employment environment will be created in the village level.

The program was chaired by Teklal Sapkota, Ward Chairman of Ward No. 3 of Shivraj Municipality. He said: “In the past, people were forced to go to the market for employment, but now the world is becoming self-sufficient by raising chickens along with household chores.”