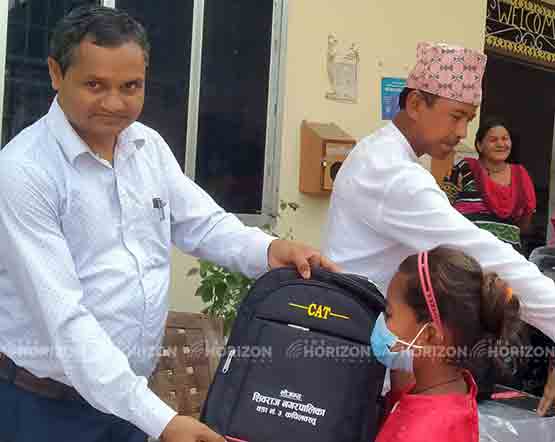 Ward Chairperson Teklal Sapkota said that the children of destitute families should be protected keeping in mind the unnatural right to education. Stating that these programs have been brought with the objective of making their future bright, Ward Chairman Sapkota said that everyone should have respect and access.

He said: “After I was elected, we started upgrading in all the schools in the ward in which drinking water was our priority. Since then, we have been conducting training for teachers for quality education including building, boundary wall, and same color rags.” Sapkota said that there was an obligation to formulate an election agenda with a promise to develop the ward office. He also reminded me about the Worthing Center, agricultural equipment, skill-based training, and the development of construction structures for the target community.

Dev Bahadur GC, the headmaster of Bewar Bhavani Basic School, Mainar, praised the work done by the ward and said that it was remarkable for teaching and learning. Stating that the work done by Ward in the education sector including Vision has been effective, GC also said that the distributed materials would add more energy to the quality of education.

They have been assisting the general public within the work area by reaching out to those who are in distress at any time. Ward Chairman Sapkota has expressed his commitment to helping the bereaved families in the future as much as he can. The program was addressed by Shyamlal Tharu, Sita Pun, and Raj Kumar Gyawali among others.