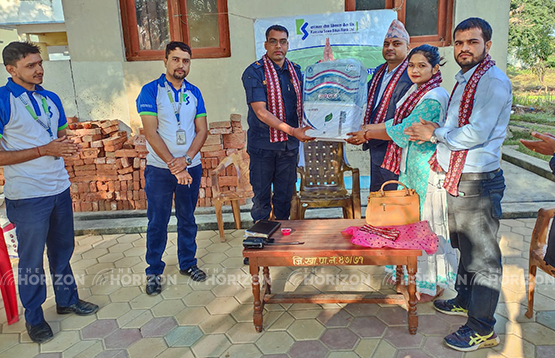 Kapilvastu: Kamana Seva Vikas Bank Limited has been celebrating its 15th anniversary with various programs. The bank has been organizing various programs under social responsibility through 130 different branches across the country.

Yagya Murti (Anish) Luitel, head of the bank’s Chandrauta branch, informed that the bank handed over one euro water filter to the ward police office, Chandrauta, on Wednesday under the social responsibility project of the bank’s Chandrauta branch at Kapilvastu’s Shivraj-5. Luitel also said that the bank has already been keeping the general community active in activities including touch win and suits under its social responsibility.

Similarly, Shankar Prasad Acharya, Inspector of Police, Ward Police Office, Chandrauta, said that the work was very positive. Stating that even small tasks seem to be effective, he stressed the need for others to join hands in such tasks in the days to come.

In the distribution program chaired by Mohandutta Khanal, Regional Manager of Bank Kamana Seva Bikas Bank, Krishna Prasad Panthi, Gorusinge Branch Manager of the bank and locals addressed the handover program. The bank has also stated that it is planning to donate blood in Butwal next Saturday within the weekly program.