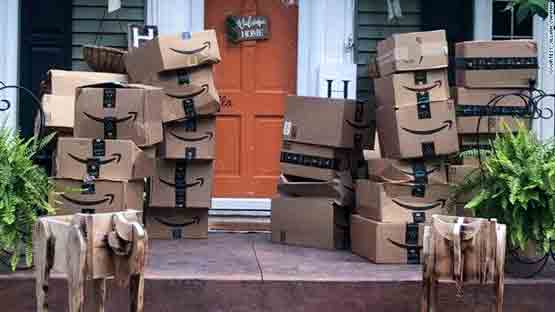 Even not ordering, a woman from US received 150 Amazon packages

New York: Isn’t it a wish come true if you get a free delivery at your doorstep for something you did not have to pay for? Something along the lines of a welcome gift?

That is exactly what occurred to Jillian Cannan, a New Yorker. She did receive over 150 Amazon orders that she had not ordered.

She told that it began on June 5 and that she assumed it was something her partner had ordered.

“I believed my business partner had placed an order for it for our business that was on backorder,” she explained. “So I opened them up to condense the boxes and discovered they were mask brackets,” says the author.

She then inquired about these shipments with her business associate, who stated that he was unaware of them. Jillian examined her boxes at this point, only to discover her  name was blank.

However, the issue was not resolved. She began to receive more shipments from various carriers. She even informed Amazon about the error, but they advised her to retain it and simply file a ticket.

“So the one day I moved all the things off of my porch and I left,” she told , “and I received a phone call from my best friend’s mother approximately an hour later.” ‘Just so you know, there’s this lots of packages in your porch,’ she says.

She contacted Amazon once more, and this is when the business discovered who was scheduled to get the products. Mask brackets were included in these kits. However, since Jillian was unable to return it, she devised a plan to make use of all of the masks.

She planned to make DIY mask kits for patients at the local children’s hospital using the children’s brackets. She’s finalizing the calculations and preparing to donate all of the mask quickly.