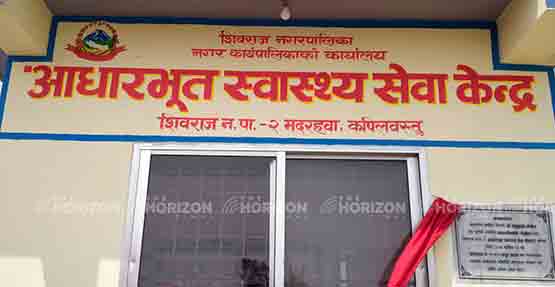 Nepal: A building of a basic health care center has been inaugurated in Madarahawa, Shivaraj Municipality-2 of Kapilvastu. The service center was inaugurated during a program on Wednesday and the landlord was honored, the organizer said.

Shivraj Nagar Chief Netra Raj Adhikari while addressing the inauguration program of the building said that the obligation to go away has been removed. He said that the building was constructed keeping in view the problems of the local community. Stating that they have been paying rent for the service in the past, the chief official also expressed confidence that it will be provided easily now. He also thanked the donors for donating land for the construction of the service center keeping in view the health of the common people.

Meanwhile, Deputy Chief Shiva Kumari Tharu said that health posts including birthing centers have been set up in almost all the wards of the city. She said that she and the municipality have made every effort to provide convenience to the citizens in various places since she was elected. Tharu claimed that she would no longer have to go to Butwal and other places to get a normal video X-ray.