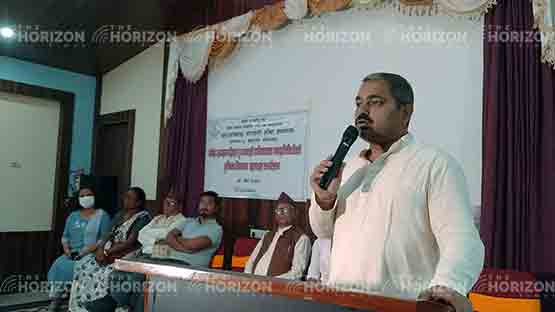 The words about Medical Tourism development by MP Shah, The Horizon Times, News of Nepal

He also stressed the need to move ahead with medical tourism. MP Shah said that Nepali citizens as well as Indian citizens are attracted as eye hospitals in Nepal provide quality eye services.

Similarly, Deputy Mayor of Shivraj Municipality Shiva Kumari Tharu said that the eye hospital has been cooperating with the eye hospital for the past few days and the municipality will continue to provide assistance for the protection of sensitive organs like the eyes.

Meanwhile, the newly elected vice president of Gadhwa rural municipality and Chhand (Kalebabu) of Narayani Eye Hospital, Bahadurganj Sarada Chaudhary, coordinator of the administrative committee, said that she had played an important role in giving 25 katthas of land to the Lamahi Eye Hospital out of the three eye hospitals run under the eye health program Rapti and Bahadurganj when she was the chairperson of the Lamahi Village Development Committee in 2066 BS. She said that she will work for the management of the provincial and federal budget for Chhand (Kalebabu) Narayani Eye Hospital.

According to the hospital, all the newly elected people’s representatives of Shivraj Municipality have been provided eye health education with the financial support of Nepal Eye Jyoti Sangh, Eye Health Program Rapti, and Chhand (Kalebabu) Narayani Eye Hospital, Bahadurganj.

A discussion program on “Role of People’s Representatives in Eye Health Education and Enlightenment Campaign” of Chhand (Kalebabu) Narayani Eye Hospital was attended by 76 people including the Mayor, Deputy Mayor of Shivraj Municipality, and people’s representatives of all 11 wards and other participants.