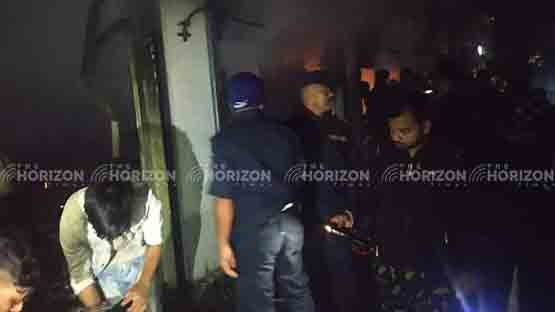 Giant blaze demolished the shops with a huge loss, The Horizon Times, News of Nepal

Kapilvastu: Two shops at Kapilvastu’s Shivaraj-5, Chandrauta have caught fire. The fire at the shop has caused an additional loss of Rs 9 million. The fire broke out at two shops located 100 meters west of Chandrauta Chowk at around 10 pm on Tuesday night.

According to the Ward Police Office, Chandrauta, the fire broke out at Chandauta Fix Shop and the adjoining laptop hospital and sales shop. The fire destroyed all the items in both the shops. According to Chandrauta Police Inspector Shankar Prasad Acharya, the damage caused to both the shops was around Rs 9 million.

Entrepreneurs said that goods worth Rs 5 million from fancy shops and Rs 4 million from computer shops were burnt. The fire was put out after two hours with the help of Nepal Police, Armed Police Force, locals, and fire brigade.

According to the police, the fire may have started due to a short circuit in the computer shop. The cause of the fire could not be ascertained. Details of the damage caused by the fire are being collected and further investigation is underway, police said.