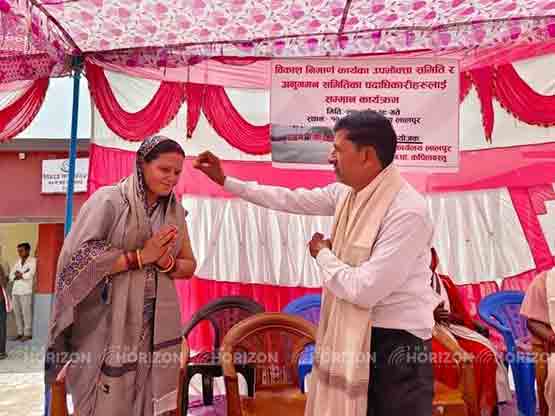 Gratitude for contributing to the development work in Shivaraj, The Horizon Times, News of Nepal

Nepal: Ward No. 10 Lalpur of Shivaraj Municipality of Kapilvastu has completed the honor program. On Wednesday, the ward office honored the officials of the consumer committee and monitoring committee of the development work, according to the ward office.

Ward Chairperson Manju Mishra informed that the Consumers Committee and the officials of the Monitoring Committee have been honored for their important role in making the development work done by the ward office in the ward strong and transparent.

Ravi Dutt Mishra, president of the Democratic Socialist Party Lumbini Province, praised ward no. 10 for its hard work in the areas of health, education, roads, agriculture, and drinking water. Mishra insisted that he had succeeded in doing exemplary work in a short time despite being a woman people’s representative.

Ward chairperson Manju Mishra claimed that she has done exemplary work in every work in ward number 10 more than other wards of the municipality. She said that they have succeeded in carrying out development works including construction of roads, drains, bridges, gravel, leveling, irrigation, drinking water, construction of buildings in schools and madrasas. Stating that she has done commendable work in her short tenure of two years, she mentioned that she has been transparent in every task.

Chairman Mishra said; “Come to Ward No. 10 to see every model work done by women people’s representatives. I have tried to complete all the work to the best of my ability and the budget of the ward.” She said that various skill-based and public awareness works have been carried out for the development of women and children.