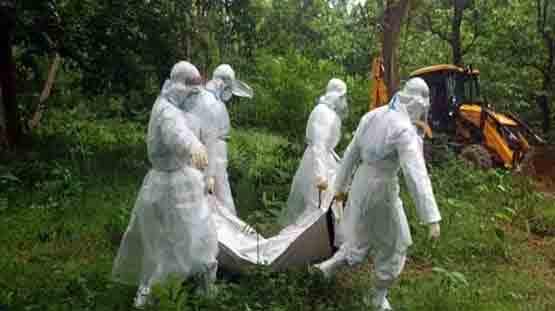 Kapilvastu, Nepal: A new variant of Coronavirus has killed 17 people in Kapilvastu’s Shivaraj municipality. Four corona-infected people have died at the basic health care hospital run by the city. The bodies of the victims have been managed by the health workers.

The municipality has conducted isolation for the treatment of corona infected at Shivaraj Basic Health Care Hospital.

The health workers have been managing the bodies in Shivaraj Municipality. Initially, the Nepal Army managed the two bodies.

Health Personnel Pramod Poudel said that it would be a long process for the Nepal Army. Not to touch the corpses of those who died due to corona infection. Basanta Devkota, nurses Kalpana B.K, Sindhu G.C, and Sarjila are active in body management, said Bhattarai.

City Chief Netra Raj Adhikari said that it was commendable for the health workers to take risks and manage the corpses even when their relatives did not come forward for the management.

He said that all the citizens should provide encouragement to all the health workers who are away from their families for the health protection of the citizens.

A total of 17 people have died from corona while undergoing treatment at various places in the municipality so far, according to the Shivraj Health Branch, Kapilvastu, Nepal.