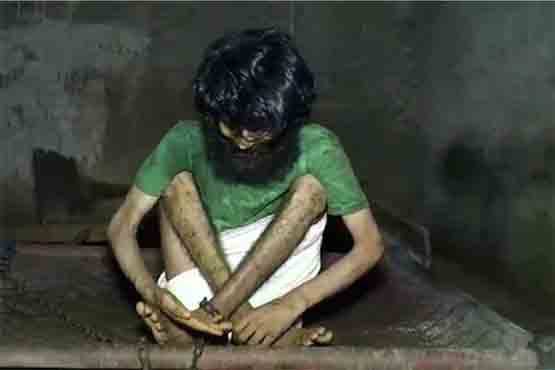 India: In the Ambala region of Haryana, a mentally challenged youth has been chained for almost a decade and is living a miserable life. The youth was rescued from his house in Fatehpur village in the district by Patiala-based NGO Mera Aashiyana on Monday evening.

“We arrived to rescue the youth after the Fatehpur village head alerted us about a youth who had been chained for the past decade by his family members,” a Mera Aashiyana member told the media.

Sarabjit has been recognized as a shackled adolescent.

The three-person family was crammed into one room in a run-down house in the village. “The rescued teenager was chained in one of the house’s corners. Sarabjit’s brother and mother, on the other hand, lived on the opposite corner of the room,” an NGO member noted.

“The residence doesn’t appear to have been cleaned in years. Sarabjit appeared to vomit and urinate in the place where he was bound, based on the state of the room. “When we entered the residence, we couldn’t stand inside for more than a few seconds since the room smelled like pee and feces,” a member of the NGO claimed.

The NGO workers also stated that rescuing the youth from the house took hours. “It appears that Sarabjit’s shackle chain and lock were never replaced. “The shackles and the padlock were rusted,” stated a member of an NGO.

The NGO workers also discovered that the youth’s mother suffers from mental illness. “The victim’s mother was seated in one corner of the room, watching at us when we were attempting to protect the youth,” said another NGO member.

They went on to say that when they tried to communicate with her, she merely mumbled and didn’t react to their queries appropriately. “We discovered during our talk with her that she desired Sarabjit to be normal and receive the best therapy possible. However, due to her financial circumstances, she failed to give a nice and healthy life for her two sons,” stated the NGO worker.

They gave the young man his first bath almost ten years after freeing him and thoroughly cleaned the residence.