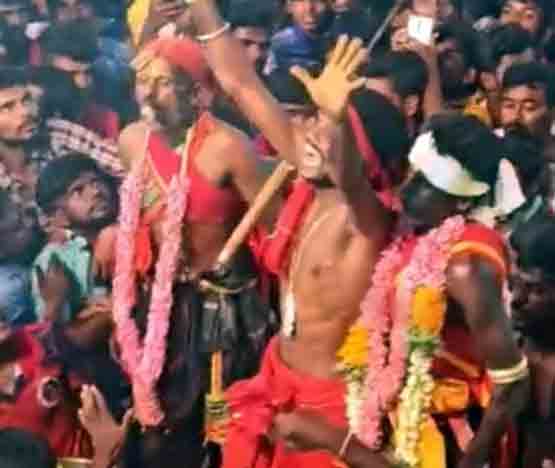 Tamil Nadu: On Saturday, eight persons were arrested in Kallurani village, Tenkasi tehsil, Tamil Nadu, for reportedly cremating and eating human flesh during a temple celebration at Sakthi Pothi Sudalai Madasamy Temple. The males are said to be members of the ‘Samiyadi’ tribe.

One Samiyadi (god-man) was shown entering a trance, dancing, and carrying a human skull on a sword in a video taken at the yearly ceremony. A few more Samiyadis were spotted on camera attempting to bite the skull’s remaining tissue.

The suspects were held for interrogation after the village administrative officer submitted a report. When confronted by the police about the suspected exhumation and consumption of human remains, they said they were unaware of the human remains and had no idea what they were doing because they were in a coma.

Police have opened an investigation and interviewed 14 people. “A complaint of trespassing at burial grounds has been filed under Section 297 of the Indian Penal Code. They also went against social distancing rules “Krishnaraj, Tenkasi Superintendent of Police, stated.

The authorities are now investigating where the human remains came from and how they got up at the temple event.