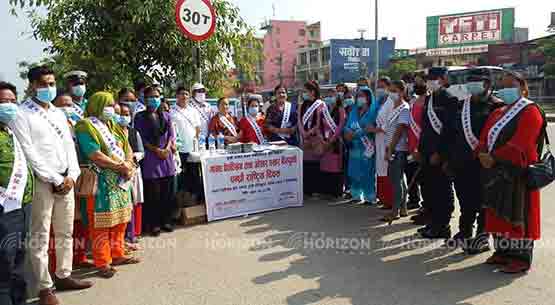 Local bodies remain silent on the 15th National Day Against Human Trafficking and Smuggling, The Horizon Times, News of Nepal

Even on this important day, it is very unfortunate that the local levels remain silent due to Corona’s cause and a limited number of organizations have organized a general program to celebrate today’s National Day. “It is unfortunate that the local government is not paying attention to the big meetings and conventions of the political parties in the country but there is less interest in celebrating the National Day,” she said.

Speaking on the occasion, Samita Malla, coordinator of Women and Child Rights Network, Rupendehi, said that human trafficking was not only a problem of Nepal but also of the world.

Speaking on the occasion, Manoj Lamichhane, Regional Head, ABC Nepal, said that human trafficking was the third largest trade in the world after arms and drugs and the solidarity of all was needed to curb it. The program was conducted by Maiti Nepal’s Rupandehi District Chief Maya Chhetri.