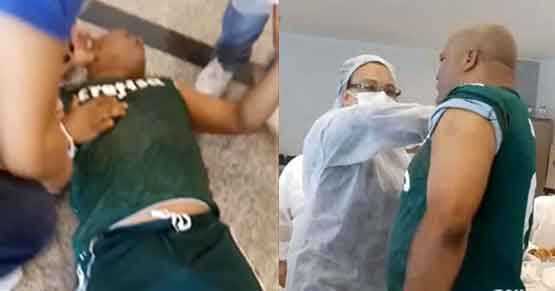 Needle fear Is True! A viral video of a Brazilian man passing out while receiving the Covid vaccine has gone viral

Brazil: A video of a guy fainting out while receiving the Covid vaccine in Brazil has gone viral, illustrating how dread of needles is all too serious.

Maguila Jnior, a citizen of Sao Paulo, Brazil, was at the Beach Point Convention Center to receive his first coronavirus vaccine shot. He can be seen in the video being agitated while awaiting for his moment to get the jab.

The man is also seen in the video attempting to ease himself down by taking deep breaths. However, the closer he gets to being immunised, the more nervous he seems to be.

Despite the nurse giving him the shot trying to reassure him, it didn’t work, and as soon as he got the injection, he collapsed to the ground – all while his friend was filming the event.

“My partner went to the mass immunisation for port workers to get the COVID19 Astrazenica Vaccine. He suffers from a severe phobia of needles. His partner told Yahoo News, “I chose to videotape it and he was really frightened.”

He became so agitated that when he received the shot, he panicked and passed out. The medical personnel can be seen swiftly responding to him to assure he was fine and that the injection was not causing any undesirable effects. He eventually regained consciousness and was able to sit up in a chair and after a little time.

He was provided drinking water and was encircled by medical personnel who helped him calm. His buddy continued to videotape his reaction throughout the incident.