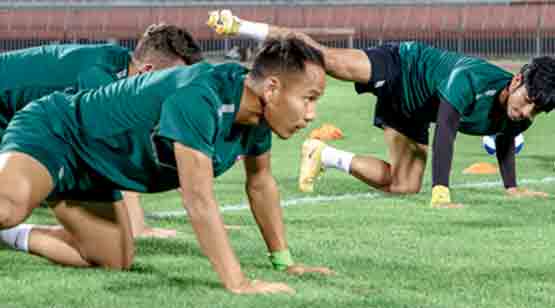 Nepal loses to Jordan in the World Cup football selection

Kathmandu: Nepal lost to Jordan on Monday in the joint selection of the World Cup and Asian Cup Football. Jordan defeated Nepal 3-0 in the match played in Kuwait City. Jordan scored one goal before the break and two goals after the break.

Baha Faisal scored two goals for Jordan. Faisal scored in the 23rd and 48th minutes of the match. He scored the first goal through a penalty and the second through a free-kick.

The third goal for Jordan was scored by Yazan Al Arab. This is Yajan’s first international goal. Jordan had put pressure on Nepal from the very beginning of the game.

Although Jordan had many chances to score, Nepali defender and goalkeeper Kiran Chemjong failed to score.

Nepal could not take advantage of the attractive opportunity to score in the second minute of injury time. Nepal’s Navayug Shrestha failed to score in  ‘One Vs One’. Nepal, which is in Group B, has scored six points with two wins from seven games.