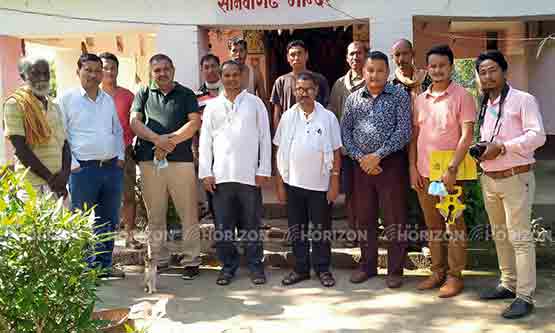 On-site observation for the development of the historic Sonwagadh and Supa temples of Nepal, The Horizon Times, News of Nepal

Kapilvastu: Nepal is considered to be a country rich in natural and cultural heritage and has beautiful scenery. It is found that foreign and domestic tourists travel from one place to another to observe the real situation. As a result, an environment of employment and economic earning has been created for the local common citizens.

In order to attract tourists, historical, religious, and tourist sites in different parts of the country are also supported. Among them, Lumbini has become the destination of Nepal’s most talked-about people from home and abroad. But in recent times, the situation in the country has become more complicated due to Covid-19. Currently, things are getting easier. Similarly, Sonwagadh of Kapilvastu, which is connected with Lumbini, is also considered to be an important place.

To reach Sonwagadh, one has to cross three canals from the East-West Highway. In the last few years since the advent of the local government, a concrete bridge has been built in one area and a bridge in two areas. Suresh Chaudharyy Tharu, a local, said that it was very easy to reach the temple along with the Tharu-dominated Bhitaria village during the construction of the bridge. Bhitaria village, which has about 82 households, seems to have made a leap in development recently. Prem Bahadur Tharu, a local and a priest who has been taking care of the Sonwagadh temple for generations, said that the locals have been protecting and promoting the temple for generations. However, the management committee has stated that they have been cleaning the temple premises for the past year by forming 14 groups in the local village.

An archeological excavation by the Department of Archeology in the year 2075 BS at the Sonwagadh temple premises revealed a 1300-year-old historical structure. Excavations have uncovered horse statues, pottery, and fragments of the seventh to ninth centuries. Experts say that the name of the temple is Sonwagadh according to the beliefs and beliefs are hidden by the king in the dense forest or between the two rivers. Similarly, a team including Lumbini Province Assemblymember, Tourism Division Office Chief Mukti Prasad Pandey has observed the development of Sonwagadh and Supadeurali.

A team of the Province Tourism Division Office has inspected the Sonwagadh and Supa temples in Shivaraj Municipality-3 on Saturday. Mukti Prasad Pandey, chief of the Lumbini Provincial Tourism Division Office, said that the team has observed what can be done with the budget of Rs 2.5 million for Sonwagadh and Rs 2 million for the Supa temple area under the tourism infrastructure development through the state government.

While observing, Lumbini State Assemblymember Arjun Kumar KC said that the state government has given special priority to Sonwagadh and Supa temples as they are religious and tourist sites. He said that the excavation of Sonwagadh last year has proved to be a historic site. He said that the local government should also pay attention to the management of the Supa temple which still has a large number of devotees and forest dwellers. As it is a secluded place and as a religious place, if this place can be protected, it will help in the development of tourism, said Member KC.

Ward Chairman Teklal Sapkota said that emphasis was laid on the development of both the religious and historical sites in the ward. Sapkota expressed his commitment that the ward and city would improve the road to Sonwagadh this year and make arrangements for easy transportation. Ward Chairman Sapkota said that a truss with a toilet would be constructed in Sonwagadh and a new temple would be constructed in the premises of Supa temple from the budget allocated by the state. He said that the existing temple would be set up within the temple area located on the road.