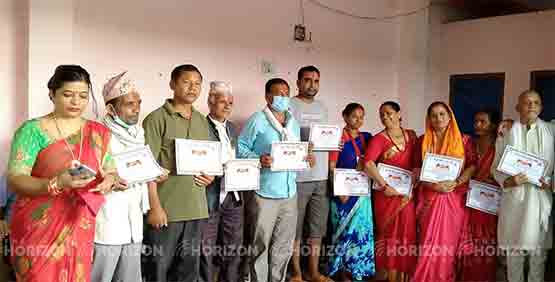 Pandey selected under the leadership of Durga Temple Chandrauta, The Horizon Times, News of Nepal

Chandrauta: The fourth general meeting and convention of Durga Temple Chandrauta, located at Shivaraj-5 of Kapilvastu, has been concluded. An 11-member Durga Temple Preservation Committee has been formed under the coordination of Bhim Lal Pandey at the convention held at Durga Temple on Saturday.

Bal Kumari Ghimire has been unanimously elected as the Vice President, Kabita Acharya as the Secretary, Guru Prasad Yadav as the Joint Secretary, and Lal Bahadur Thapa as the Treasurer. According to the organizers, Kul Raj Poudel, Kamala Pandey, Khim Bahadur Pun, Krishna Thapa, Bhirma Arjun Acharya, and Saraswati Gaire have been selected as members.

Similarly, Lila Pandey and Sumitra Adhikari have been selected as members of the Accounts Committee under the coordination of Shishir Pokhrel. In the report submitted by the annual report of the Temple Preservation Committee, it is mentioned that approx. Rs. 6.5 million has been spent.

Addressing the gathering, Ward Chairman of Shivraj Municipality Ward No. 5 Arjun Bahadur Pandey wished the new working committee well and suggested doing remarkable work in the protection of the temple. Chairman Pandey stressed the need to make the management of those who perform auspicious deeds including marriage in the Durga Temple, the focal point of Chandrauta, more effective.