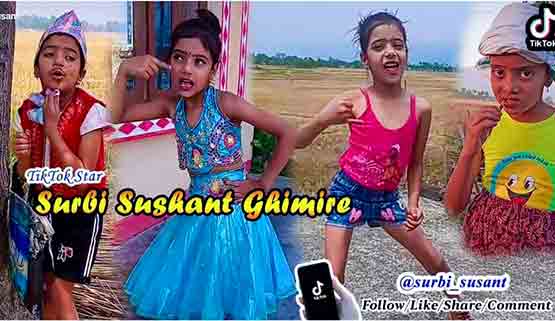 Kathmandu, Nepal: The daughter of Terai who has been living in Manari, Ward No. 2 of Sarawal Rural Municipality of West Nawalparasi, Nepal has become famous for her playful nature.

Surbi Sushant Ghimire of 7 years is luring the netizens through her TikTok videos.

Millions of people are enjoying making small videos of knowledge, dance, and comedy from the social media application “TikTok”.

Bite Dance launched Tick-Tok in China in 2016. Then in the year 2018, the popularity of the ‘Tick-Tok’ application increased and by October, it was the most downloaded in the United States. Gradually, the application became world-famous.

In Nepal too, its popularity has spread everywhere, in villages and cities as well. The netizens are making huge noise in TikTok exhibiting their acts.

Lately, the performances and dances in the song “Pipal bot ma parkhinchu” (Nepali) and Lali Lali Othwa (Bhajpuri) have made it very popular.

She said that more than one lakh people watched the 15-second video in one hour. Surbi is currently studying in class 2 at Basantapur Zenith English School Sarawal-1 Basa Basahi. She says that everyone in the school used to call her Tiktok Queen. Her Bhojpuri comedy dialogue and dance are very popular! Also, her Nepali dance and acting are engaging netizens.

Her father Sushant Sharma Ghimire is popular as a social worker along with politics while Mom Vandana Pandey is a housewife. In the videos of Surbi, she is often seen with her uncle Yuvraj Yadav and her sister Grishma Poudel.

She is popular among the users in Nawalparasi. She stated,” Many people knew her when she roams outside. She has huge fans from Uttar Pradesh (UP) and Bihar states from India.

Her followers and likes, comments have been low since the ban was imposed on TikTok in India.

She expressed her desire to work in music videos and films and dreamed of moving forward in this field through child artists with The Horizon Times. Her ticket ID is @surbi_susant and she expects support and respect for her acting and dancing skills.