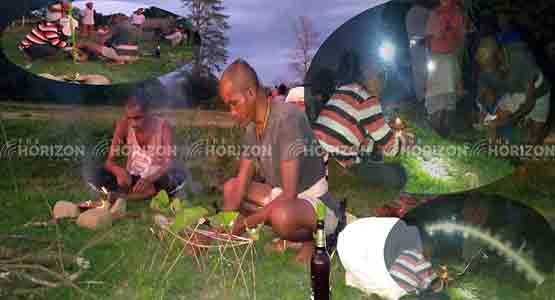 The lost historical festival of Tharu people of Nepal, Know Why and What? Tharu News

Kapilvastu, Nepal: It is considered tolerable for each community to do everything from dress to food according to their own customs and traditions. The Tharu community is also very rich in culture.

Though the nature-worshipping Tharu caste is a rising part of the country, the Tharu leaders have been claiming that the concerned bodies have not listened to the protection and promotion of many beautiful and historical traditions related to the Tharu.

There is a tradition that the Tharu community has been worshiping their ancestors with various beliefs in the values ​​and customs of some of the historical natives who have survived the struggle.

It can be seen that the customs which have been very important in recent times have been overshadowed due to the inability to pass them on to the younger generation as per the present times.

But the Tharu community of Kapilvastu celebrates these two pujas together with special significance every year.

There is a belief that by performing this puja every year from Baishakh to Jeth month, the rage in the community will be removed. It is said that this worship, which is performed before the commencement of farming, makes the food pleasing and removes the distress caused by the gods and goddesses during farming.

Guru Shri Ram Tharu said that even if Dhuriya (Baisakhi) and Chanlavat were performed together, it would be different. Dhuriya Pooja says that the grain will be happy and the common man will be aroused. Gurwa Tharu said that the elephants used to worship Chanlawat with the belief that it would take away the disease when they go out of the village.

Similarly, Suresh Tharu, a young Tharu social worker, expressed confidence that both these poojas would bring happiness, peace, prosperity, and protection from disease in his community.

Materials such as three-legged small pillars made of pigeon pea, earthenware (parai), a bottle of alcohol, Pakki Hom (Item of the same tribe), a chicken (rooster), bamboo sticks, Batasa (offerings), ghee, Dhaja (thread), etc. used for worships and demands the protection of the community by the Guruwas.

In this puja, one earthen elephant, seven horses and eight Diyas are made. Also, a mixture of neem leaves, turmeric and water (Dharkavan), ghee in a clay pan, a kind of home made by mixing coconut palm and Dates (Hom) is made into a stove (guru) and placed on a bamboo branch in all four corners of the village. The seven horses in jept behind the earthen elephant.

Prem Bahadur Tharu, a social worker of Shivaraj Municipality-3, Bhitaria, said that people from all over the village used to worship together. All the people of the village get together and worship.

Harju Tharu, a social worker and leader of Bhitaria village, said that this custom is not present in the Tharu community now, it has become a perversion of the traditional customs that have been followed since ancient times.

He said that good culture should be followed and only then can it become the center of positive change in the face of the Tharu community.

He expressed dissatisfaction over the disappearance of some good traditions in the Tharu community as the old culture which isn’t handed over to the new generation should be practiced in the coming generation.

Must Watch Video of True way of Worship