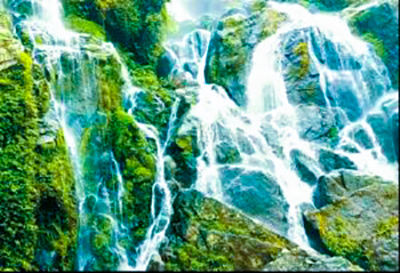 The name of Bahubali waterfall, a very beautiful waterfall in Roshi village of Kavre district, has been going viral on social media including Facebook and TikTok for the past few days.

Hundreds of people come daily to see the waterfall as the city market is deserted due to the lock down. More than 800 people arrived last Saturday alone.

There are two ways to reach the waterfall. First you can reach Dapcha from Panauti of Kavre via Namobuddha Road or from Namobuddha or Dhulikhel via Kavrebhanjyang, Namobuddha Road and reach Pipaltar, Kafaldanda. Similarly, the waterfall can be reached from Katunje Chowkidanda on the border of Namobuddha Municipality and Roshi Village on the BP Highway along the Roshi River.

The waterfall can be reached after a 2 hour drive from the district headquarters and a 30/40 minute walk. The old Newar settlement of Dapcha seen during the journey, the captivating rural scenery, the captivating mountains of the Mahabharata mountain range, etc. captivates anyone.

According to the locals, the risk of infection has increased as hundreds of visitors have come to Corona.