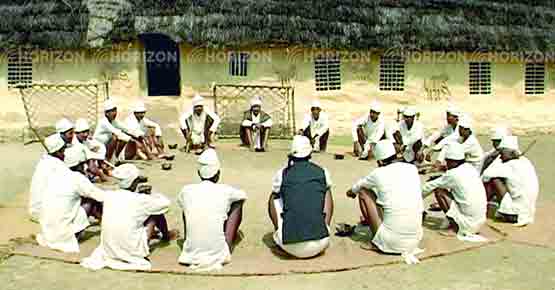 What is Barghar System in Tharu Community of Nepal? Know why it’s disappearing, The Horizon Times, News of Nepal

Nepal: With the change of time, it is natural that various sectors including society will be affected. But it is wise to abandon the old tradition of spreading perversion in the society and modify the customs that reflect some good or material identity. Our Nepal is a country that is considered as a “Flower garden of four characters and thirty-six species”. The Tharu community under it is certainly not the richest in the world in terms of culture. In the history of the world, Tharu culture has also made a remarkable contribution to keep Nepal’s head high.

Experts say that although the customs of the Tharu people from Mechi in the east to Mahakali in the west differ according to the regional diversity, most of the festivals, including the festivals, remain the same. One of which is the special “Barghar” practice or system. This system occupies a large place in the areas where Tharu is predominant. In general, this practice is now leaving the place.

In this context, looking at the western region, it is found that “Barghar” system has been implemented only in some parts of Kapilvastu. Vijayanagar rural municipality ward no. 2. It is said that they have managed to survive till now as there is a Tharu settlement especially in Laharaila.

Barghar Krishna Bahadur Tharu of Laharaila village, which is considered a remote area of ​​the district, said that he has been carrying the responsibility of the village Barghar for more than a decade. He shared his experiences of running away from social activities in the past. Barghar Tharu said that the Barghar practice has become weaker and more challenging due to political pressure. “Due to the political pressure in the country, it is very complicated to work according to the needs of the society,” he said.

The Barghar system has been in operation in the Tharu community since time immemorial. According to the Tharu leaders, especially the Tharu community celebrates the New Year in the month of Magh or the distribution of houses during the Maghi festival. This system has played a significant role in streamlining every activity, giving a good message of unity for the community.

Tharu leaders have been pressuring and demanding the government to strengthen the existing system by establishing Barghars in places where there is no Barghar, including the Tharu Welfare Assembly and other organizations playing a leading role in the Tharu community.

Barghar plays a leading role according to the needs of society. Keeping every activity of the Tharu community in order, every incident that happens in the community is reconciled internally as well as conveys the message of unity.

According to Barghar, it plays an important role in transforming a prosperous society. It has a special significance as the Barghar practice will help to take effective steps in development while maintaining unity in the community.

Why is the Barghar practice disappearing?

As the responsibilities of the village are increasing and there is no source of income, there is an obligation to leave the housework and be displaced. Even though this practice or practice is good, the current generation has tried to avoid taking responsibility as a nuisance, and simply accepting it has led to the disappearance of the practice of Barghar.

The role of Tharu leaders in making it run again

Efforts should be made to protect and promote the rituals for social benefit by making the locals aware of this practice by spreading awareness even at the community level. By uniting the common people of the Tharu community and establishing Barghars in the Tharu-dominated settlements, it seems that they have to play an effective role in strengthening and strengthening the existing Barghar tradition. It is necessary to demand from the government to continue this practice and move forward in a legal manner for the realization of one’s rights.