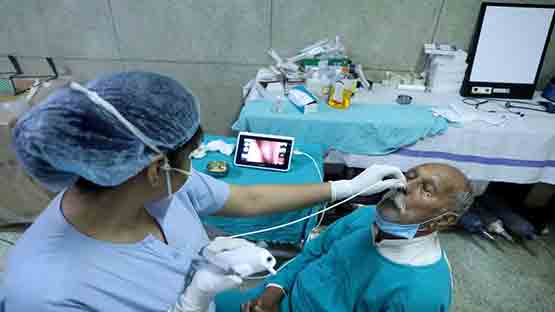 Black fungus having 11,717 cases, with Gujarat leading the way with over 2,800 patients and Maharashtra in 2nd position

As of May 25, India has 11,717 cases of black fungus, also known as mucormycosis, with Gujarat taking the lead, followed closely by Maharashtra.

Union Minister Sadananda Gowda shared the information on Twitter on Wednesday, saying that an additional 29,250 bottles of the Amphotericin B medicine, which is used to cure the dangerous fungal infection, have been allotted to all states/UTs depending on the number of sufferers.

Gujarat had 2,859 black fungus infections, trailed by Maharashtra with 2,770 cases and Andhra Pradesh with 768 instances.

Chief Minister Arvind Kejriwal announced on Wednesday that Delhi has 620 occurrences so far, but Gowda’s data showed that the capital city has cases of  119.

Mucormycosis is more likely in persons with decreased immunity due to Covid-19, diabetic, kidney problems, liver or heart problems, age-related difficulties, or those taking medicine for auto-immune diseases such as rheumatoid arthritis.

In the tiny holes behind the forehead, nose, cheekbones, and in between the eyes and teeth, the disease develops as a skin infection. The virus then spreads to the eyes, lungs, and potentially the brains. It causes nose darkening or blackening, impaired or double vision, chest pain, breathing difficulty, and bloody coughing.

With cases spreading from across nation, the Epidemic Disease Act has been used by eleven states to declare it a reportable illness. A reportable sickness must be notified to the government officials by laws.

The fungal infection is not new, according to AIIMS Director Randeep Guleria, but the number of cases has grown with Covid-19. He further stated that the sickness is not contagious.

Guleria also stated that one of the major reasons of black fungus instances is the “abuse” of steroids, and that colour labelling of the fungus was deceiving because the colour of the fungus may be perceived differently if it evolved.