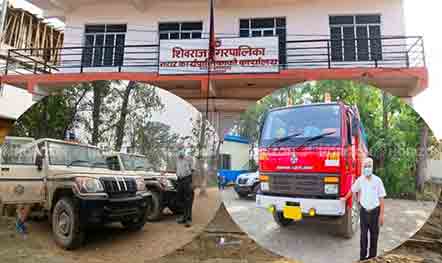 In Shivraj Kapilvastu after several attempts, ambulance and fire brigade is operated

Shivraj, Kapilvastu: The Shivraj Municipality, which has been very popular lately, has been busy meeting the need of the city dwellers. It seems that the city has been fulfilling the promises made in the community, by people’s representatives, keeping a view of the problems at the local level.

After winning the election, the people’s representatives who have made the election agenda often hear many incidents of indulging in their own interests. But after reaching the government, there are few leaders who listen to the sufferings of the common people.

The Shivraj Municipality of Kapilvastu, Nepal has addressed the promise made at the same community level during the election.

The Shivraj Municipality has fulfilled the dream of the locals demanding ambulance and fire engine for a long time, ignoring the growing problem of human and natural disasters at the community level.

A few days ago, the municipality purchased a fire engine and two ambulances and brought them into operation. Due to the lack of ambulances in the city, the patients were forced to pay a lot of money and due to the lack of a fire brigade, millions of rupees were lost every year due to blaze.

Mayor Netra Raj Adhikari said that he was successful this year after many efforts to bring fire brigade and ambulance after the election. Stating that it could not be brought last year due to various technical reasons, he said that now the city dwellers will be comfortable.

Recalling that there are many fire incidents during storms but there is no fire brigade in the city, people are forced to live on other levels, said the mayor. “Now the fire brigade arrives at the spot with a call.

The ambulance will provide services to the citizens easily and special discounts are planned for the lower classes.”

He said that the municipality will fix the amount for free for the patients of Coronavirus and other patients. Aryal said that two drivers for the ambulance and two firemen and one driver for the fire brigade have been appointed.

It is said that the decision regarding the operation of the fire brigade will be taken after discussion with the executive.

And he also said, “The positive work done by the municipality is commendable.”